1st place in the international landscape architecture competition Urban Garden Award 22: “Urban Sustainability Corridor – from the port to the airport”. 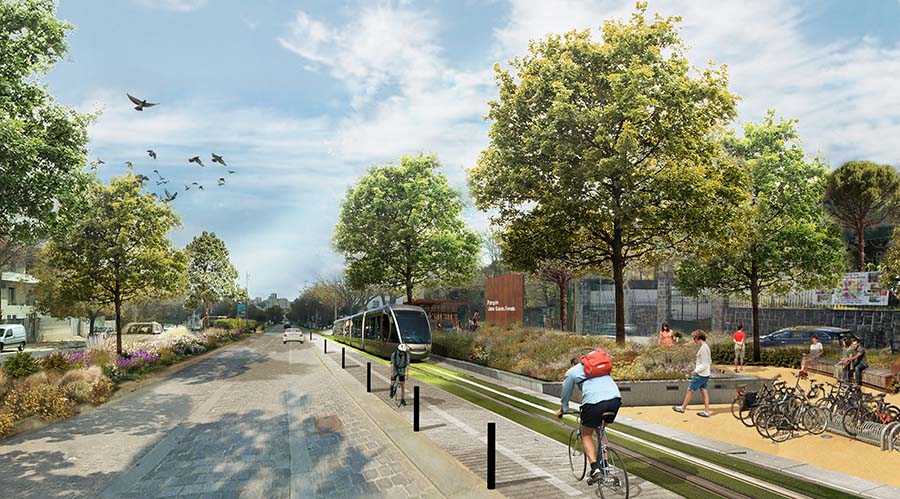 Our project began by reflecting on the historical context of these areas of the city of Lisbon, as well as understanding the teachings and projects of Gonçalo Ribeiro Telles in the city and in the limits of the intervention area through a historical survey: projects that are still a reference in the city and that in one way or another influence later decisions in terms of urban growth and contributed to its amenity.

Another crucial theme of our approach is that of a new model of urban mobility and the search for solutions that involve reducing the use of cars in the city and the implementation of more ecological alternatives.

Our general proposal in terms of mobility on the route from Praça da Estação Fluvial to Lisbon Airport was based on a preference for smooth mobility – walking or cycling, or, if it is not possible to do the entire route by this means, use public transport, adopting multimodal mobility. In this way, along the route sidewalks were made wider, we gave preference to the bike path along the proposal.

The proposal is also based on one of the most discussed concepts in recent years based on the plan that Carlos Moreno implemented for the city of Paris until 2025, which is the city of 15 minutes. The concept defends that the best mobility is the one that guarantees accessibility to everything we need for our daily lives. This distance should be up to 15 mins, either on foot or by bicycle.

This principle aims to bring a sense of community. Bring cities back to people by fighting climate change and making them more sustainable.

This concept of proximity is, in fact, present in the foundations of the principles of Landscape Architecture in Portugal, with a strong focus on the design activity of the first generation of Landscape Architects at the Lisbon City Council for the Alvalade District, among whom Gonçalo Ribeiro worked. Telles, Edgar Fontes, Manuel Azevedo Coutinho and Manuel Sousa da Câmara.

“Alvalade Neighborhood built between 1945 and 1970 incorporates influences from the Modern Movement, which resulted in significant changes in the way of observing and conceiving urban space, highlighting among these, the opening of the street to a logic of common enjoyment and implementation of a network of pedestrian paths necessary for the application of the “neighborhood concept”, which resulted in a mesh of interstitial urban spaces with particular characteristics.”

This idea of Interconnecting spaces and territories (sewing the city), building bridges “when we cannot walk, we jump” – connecting places and people is also fundamental and one of the principles defended by Gonçalo Ribeiro Telles.

Along the route, the idea of our intervention would be to create a continuous cycle path that would connect the Port to the Airport. Prioritizing this mode of transport seemed to us to be one of the most important measures at a time when we should be less and less dependent on fossil fuels and nonrenewable resources that contribute to the problem of climate change. On those means, the tram and the rehabilitation of the old power lines are among the points that seem most important to us in our proposal. Being electric and not dependent on fossil fuels is one of the modes of transportation of the future. 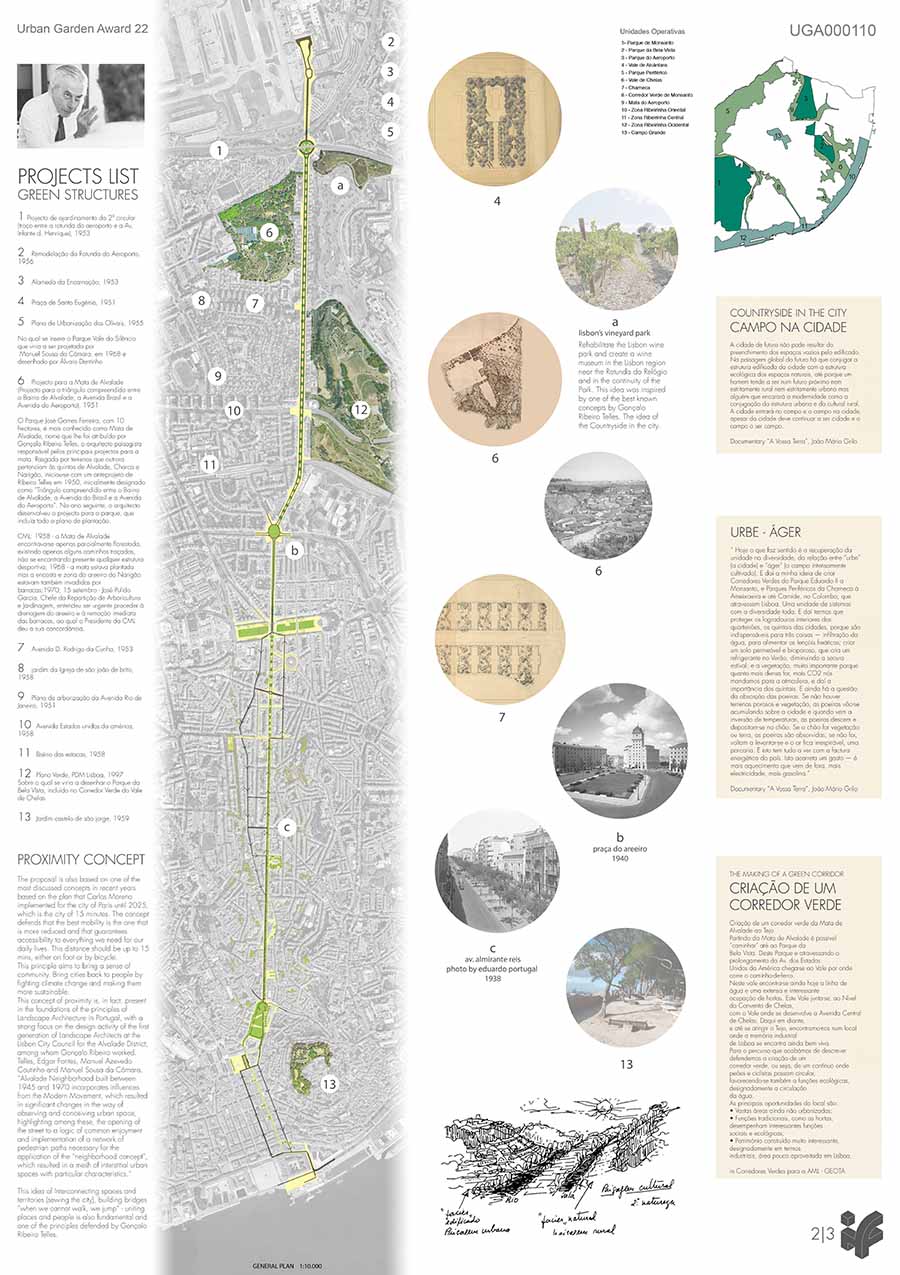 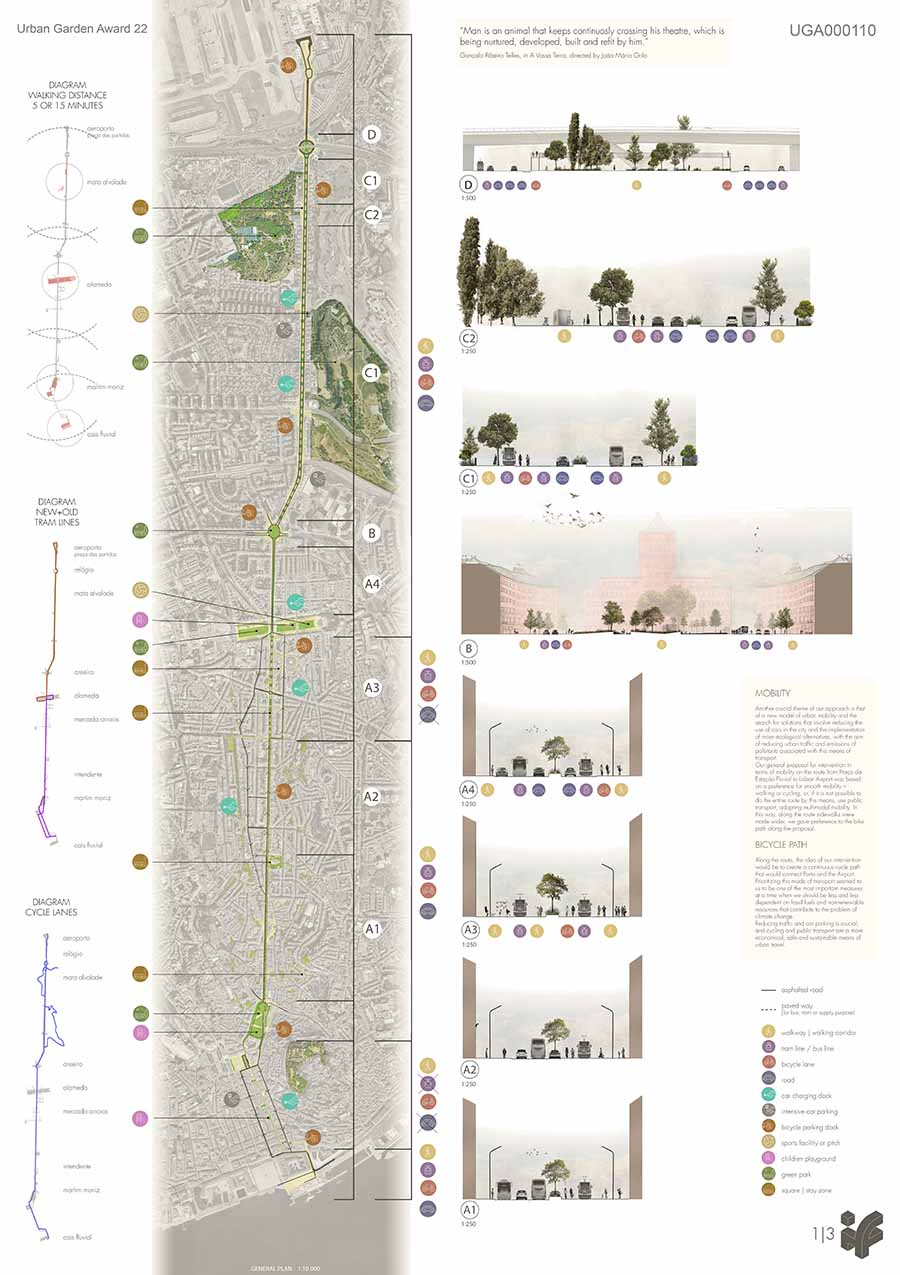